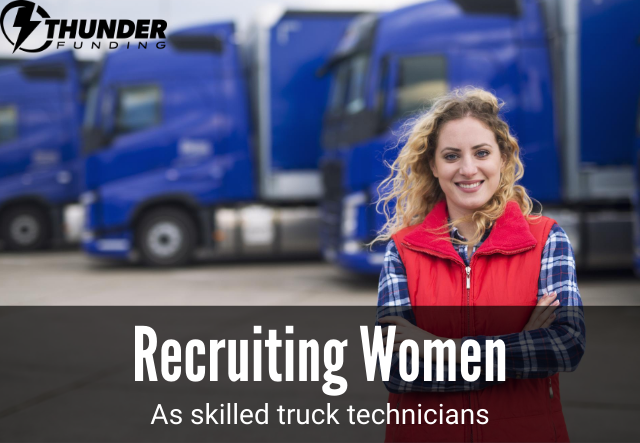 According to a 2015 Bureau of Labor Statistics study, the trucking industry will need to recruit 67,000 new technicians by 2022 due to growth and to replace the men and women who are slowly starting to retire. Additionally, the study indicated the industry will need to potentially recruit another 75,000 diesel technicians just to keep up with market growth. Added on top of that, the economic boom in 2018-2019 led to a record number of commercial trucks sold. Why does this last point matter? Because newer trucks are so much more advanced compared to older models. Fleets are now going to need truck technicians who are technically sound enough to service these more sophisticated vehicles.

Up until recently, most industrial trades have mainly directed their recruiting efforts towards men, which make up less than half the population. But, what about the other half? Groups like Women in Trucking led by founder and CEO Ellen Voie have been advocating for more female representation in the industry --  and that includes women as viable workers on the shop floor.

George Arrants, vice president of the ASE (Automotive Service Excellence) Education Foundation notes, “We don’t have a technician shortage; we have a shortage of qualified applicants.” This point further supports what people like Voie have been touting for years now: That women can be a huge asset in the trucking industry.

Misconceptions About The Job

There are plenty of negative stereotypes associated with women as it relates to being a truck technician. And, there are also some positive ones. Some say that women are more detail-oriented, focused, organized, and tidy. A woman’s smaller hands can also be a major advantage when working with intricate wiring and accessing areas that many men can’t without having to remove a number of other components along the way. But, with all these shining positives in favor of women on the shop floor, many still say that women are just not physically strong enough to do the job. And, this one belief has kept women away from the industry and vice versa.

But, if there’s one thing we’ve learned from being in the trucking industry for over 20 years, it’s that no one should have to do every task by him OR herself. There’s not a single truck technician who hasn’t been put to the test through years of hard labor that also hasn’t leaned on a team member at one point or another. Teamwork is the key to success when dealing with the more advanced and complex machinery of today’s trucks. And, we believe these shop teams can include capable men and women alike.

Making The Job More Accessible To All Potential Applicants

There are a number of ways the industry can attract more qualified truck technicians. One is through financial support. The Women In Trucking Foundation (WIT), another advocacy group supporting the representation of women in the industry provides scholarships to qualifying females looking to enter the field. In 2019 alone, the WIT awarded scholarships to 16 amazing women who are now pursuing a career in the trucking industry whether it be in a leadership position or as a commercial driver.

Another major hurdle that needs to be addressed is whether or not students are being trained in the things modern shops require in a technician. Do these trade schools provide students with new equipment and trucks to hone their skills on? Are instructors well-versed on the technical demands of today’s more advanced vehicles? In the last 5 years alone, trucks have added more sophisticated electrical systems, cameras, and sensors for collision avoidance and system monitoring. Has curriculum and resources been adequately updated to train students on these systems? It remains to be seen.

Whether we’re addressing the technician shortage or the driver shortage, it goes without saying that fundamental changes need to be made in the beliefs we hold about who is ready, willing, and able to take on a challenging and rewarding career in trucking -- regardless of whether they are male or female.