The Debate: Side Guard Rails on Trucks 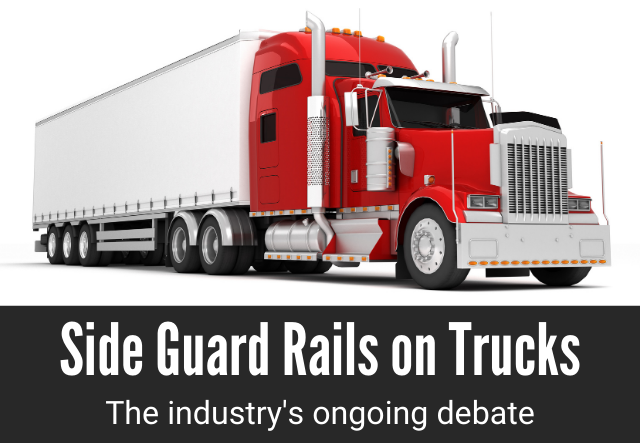 After its recent exposure in the media on CNN, the issue of underride guards has resurfaced as a topic of interest amongst drivers, carriers, and lawmakers. Side guard rails are not currently mandated in the US and the opinions on that appear to be split. Many certainly agree that underride guards are an effective solution for protecting people from injury and death during truck collisions. However, there are other considerations that need to be made in terms of the substantial monetary costs and challenges associated with these rails that are borne by carriers and truckers. It’s a dilemma that the industry is certainly grappling with.

So, where does that leave us?

What The Statistics Say

And, according to the U.S. Department of Transportation, there have been approximately 4,000 fatalities for those involved in underride crashes between 1994 and 2014. Of that number, it is noted that 1,530 were related to side underride crashes.

In May 2018, the IIHS conducted a 35-mph crash test using a passenger vehicle and a trailer equipped with a side guard. When the test vehicle hit the side of the 53-foot big rig, the side guard bent, but it did stop the vehicle from sliding underneath. The IIHS has continued to run tests to help illustrate the importance of preventative measures in side underride crashes.

An Unclear History of Potential Regulations and Policies

In 2017, a bill called The Stop Underrides Act was introduced to Congress. This bill set out to mandate underride guards to be fitted on the sides of trailers and on the front of trucks to prevent cars from sliding under and killing or injuring passengers. It was introduced by Sen. Kirsten Gillibrand (D- N.Y.) and Sen. Marco Rubio (R-Fla.) as well as Reps. Steve Cohen (D-Tenn.) and Mark DeSaulnier (D-Calif.). Currently, both underride guards on the sides of trailers and front of trucks are optional safety measures. The bill also sought to strengthen rear guards, which have been mandatory on trailers since 1953. However, the last time rear guard standards were updated was in 1998.

The Stop Underrides Act would have also required all underride guards to be inspected periodically. If the guards failed to pass inspection, truckers could be placed out of service until the equipment was repaired or replaced. The bill directed the Department of Transportation to review underride standards every five years as advancements in new technology improve. Unfortunately, The Stop Underrides Act of 2017 was presented on December 12, 2017 to Congress, but did not receive a vote.

Prior to the Stop Underrides Act of 2017, the National Highway Traffic Safety Administration (NHTSA) published a regulatory proposal to upgrade rear-impact guard requirements in 2015. The rule sought to align U.S. standards with the more stringent rules that Canada has in place. However, the agency has yet to move forward with it.

The NHTSA also made an announcement in 2013 that it was planning on collating heavy-vehicle crash data. The plan was to create a computer model to test underride guard designs. The NHTSA has not put out any updates since the announcement.

How Carriers Feel About Side Guard Rails

There’s no question that carriers and owner operators all want the roads to be a safer place for everyone. And, they certainly acknowledge the value of side guard rails. This is a fact.

But, let’s also look at some other facts associated with side guard rails that carriers must consider:

So, what is the rest of the world doing? The United Kingdom, Europe, and Japan have all mandated side guards. And, in the US, progressive cities like Boston, New York and Seattle have mandated side guards on city-owned and contracted trucks as part of the Vision Zero initiative to reduce crash deaths and injuries.

With all the renewed conversation around this topic and the history of associated regulations that never came to pass, it could be said that it’s just a matter of time before government agencies and advocacy groups make side guard rails required at some point. And, if this is the case, the more educated and prepared carriers and truckers are about this future possibility, the better.

What do you think of the debate on side guard rails? Tell us in the comments below!