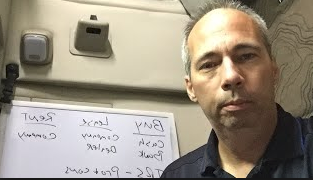 In Honor of National Truck Driver Appreciation Week, we’re proud to spotlight Jeffrey Like of Like Trucking Corp from Davison, Michigan!

We’ve been working with Jeff since he got his carrier authority and joined Thunder Funding in 2017. Around the office, he’s become known for his can-do attitude and rapidly expanding operation. Among others drivers, he’s known as a trucking business guru with loads of free advice on his YouTube channel, Big Rig Radio Network.

Our conversation with him is full of advice and tips on being a good driver and a great business partner…read on to learn more!

Thunder: What can you tell us about Like Trucking?

Jeff Like: We are a 100% owner operator company. September 2017 is when I decided to incorporate and I hired one of my friends who I’ve known for 20-something years and put him on. In February of ’18, we decided to grow the company, where we went from 2 of us to 11 of us.

The most important thing is we treat every driver like a real business partner. The way I operate it is, if we make a change, I’ll call every single one of our operators and get them on the phone on a group phone call. I’ll tell them what I’m thinking about doing and why I’m thinking about doing it, and then we take a vote. If the majority of the vote wins, then we implement that rule.

I have a lot of other guys that I helped get their own authority, now they are kind of following suit with what I’m doing using the structure and the tools I use. So they are following along on the plan that I’ve set and help them out as much as I can on the way.

Thunder: The way that you’ve chosen to run your company is pretty unique, how has being a company driver influenced the way you decided to run your own operation?

Jeff Like: After the Gulf War was over in1992 I became a company driver, but I was only a company driver for about a year. I saw an ad in the paper for Freightliner and decided I was going to buy a truck. And everybody said “Oh you can’t do it” and “You’ll never make it.” So I bought a truck anyway, and that was 26 years ago!

When I transitioned to owner/operator it was all by the mile. No one would share their information either. You had guys out there with their own authority, but they never shared their information so you didn’t really know how to do that and there’s nowhere to find out.

At first, I just went on from one company to another company until I found Landstar Ranger. They were a company of owner/operators and their little broker system where you could pick and choose where you went. So I stayed there for 10 years, I had my own trailer.

Then Schneider National came out with the same system but better, so I went there. And I stayed there for 10 years. In the last 2 years I started the youtube channel, teaching guys how to come over there and run the system and be successful at it. I think a hundred guys or so came over there and tried it out, following what I do.

When I was over there, Schneider wanted to put these crash mitigation systems on the trucks. I was getting really tired of companies telling you what you have to do because they aren’t my business partner…and now they’re going to tell me I need to buy a new truck, which is a $150,000 investment.

So I told my friend I was going to out and get my own authority. I called Scott at Thunder Funding and 30 days later, I had my own authority and I was off and running. I told Scott back then that I had my own YouTube channel that was small, but people followed me and did what I did and that I would be bringing them a lot of clients. He didn’t that it would get to where it is, but it’s really blossomed.

At the trade shows a lot of guys will come up with their wives and kids to thank me that I’ve helped change their lives! It’s really humbling to be able to touch somebody’s life like that.

I started teaching people how to get more streamlined. I streamlined the business to where you could run 10, 20, 30 trucks with just two guys, instead of having 5 or 10 office people.

I got over a thousand phone numbers and I’ve talked to all of them. I helped those guys out and if they have my phone number they can call me for free. And they get a hold of me and I’ll help them out as much as I can and watch them succeed.

if you include someone, and you ask their opinions and listen to them and then you talk it over from each person’s viewpoint, it makes the business grow. Then eventually, it comes back to them even two or threefold. Because as the business grows, then they get bigger percentages and everyone makes more money.

At Like Trucking, they are all my business partners. I want to see them succeed and the better they do, the better I do. And if they are part of something, and they know they have a voice, they’ll stay, they won’t go anywhere else. They get on the board and find their own freight, they negotiate it themselves, they get the rate-con themselves, they sign it…they just send me a copy. I have no say-so in what they are doing. They are truly their own business at that point, we are just working together and streamlining.

Thunder: What’s the number one piece of advice you’d give to a new owner/operator?

Jeff: Boy, what I tell the younger guys or even the older guys getting into it…If you’re going to buy a truck, buy one with some type of a warranty. Preferably at least a 2 year warranty because that gives a good chance of making it. If you can get a full maintenance lease to start, that’s a great way to do it. It’s a little expensive, but you don’t have to worry about any money for repairs. So I teach them different ways to do the business.

Two, have at least some money (or a line of credit) set aside in case the truck breaks before that warranty goes out of it’s not covered.

And three, if you’re married your spouse has to be on board with what you’re going to do.

If they are on board, you’ve got to have the finances or the credit. And never buy an old truck with no warranty. Because if you drive it off the lot and two weeks later the turbo goes out, do you have the 8 or 9 grand to fix it? If not, you’re out of business, that quick.

Thunder: What’s one of the most gratifying experiences you’ve had a trade show where someone’s recognized you from youtube and said something to you?

Jeff: I had one guy come up to me and I got him over to Schneider from where he was at. His truck was falling apart and he couldn’t fix it, he was going bankrupt. Within 3 months he got caught up on his bills and he’s just been excelling ever since. It stopped him from having to file (Chapter 11), he’s able to be home a lot more so he had a better home life.

At the last trade show, a driver Hector come up to us and he’s got a wife and kids and he wanted to take the whole trucking outfit out to dinner, and that’d be like $400 or $500 dollars. And I said no, you keep that money. I’m just glad you’re succeeding and that your family is doing good and keep the money. Spend it on them and if you need any more help, just call.

Thunder: Do you have a favorite route to drive?

Jeff: The Midwest, just the midwest. Because the freights always good there, it’s flat ground and you get your best fuel mileage. And there’s lots of places to park. Out East is nuts, and if I was out West I’d get nothing done because I’d be out surfing with Willie and Scott and everybody just gaining weight!

For more information about starting your own trucking business be sure to check out this blog post: Thinking of Starting your Own Trucking Company?