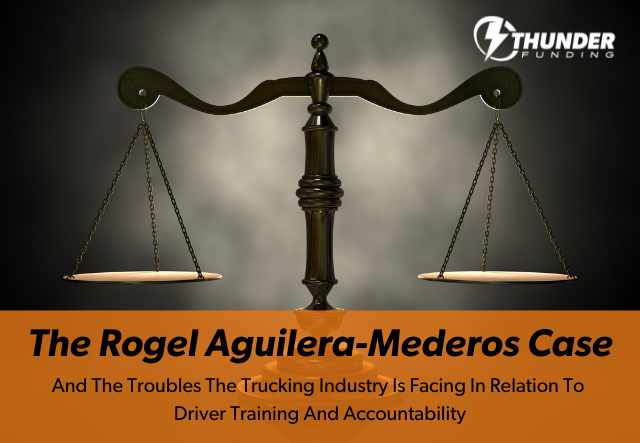 By now most of us are familiar with the tragic story of Rogel Aguilera-Mederos, the 23-year-old truck driver whose brakes failed at more than 80mph in Colorado, causing a multi-vehicle crash, killing four people.

On April 25, 2019 according to The Associated Press, Aguilera-Mederos’ truck was carrying lumber and going at least 85 mph on a part of Interstate 70 where commercial vehicles are limited to 45 mph because of a steep descent from the Rocky Mountain foothills. The initial impact caused a 28-vehicle chain-reaction wreck that ruptured gas tanks, causing flames that consumed several vehicles and melted parts of the highway, AP reported. Four were killed in the crash and six were injured.

The trucking community has been shaken, not only by the tragic events that unfolded in April of 2019, but also because Aguilera-Mederos was originally convicted of vehicular homicide and other charges and sentenced to 110 years in prison on December 13, 2021. This brutal sentence reverberated throughout the trucking community – and millions rallied in support to have Rogel’s sentence reduced. More than 5 million signatures were received by a change.org petition and hashtags like #JusticeForRogel #NoTrucksToColorado #NoTruckColorado were used all over social media to get his sentence reduced.

On December 30, 2021, Colorado Governor Jared Polis commuted Aguilera-Mederos’ sentence to 10 years in prison. Although Rogel’s sentence got reduced, thanks to the support and backing from truckers across the country – many petitioners shed light at what they believe is a bigger problem in the industry and the reason why tragic events like this keep happening. According to an Op-ed in Land Line Magazine by William “Lewie” Pugh, executive vice president for the Owner-Operator Independent Drivers Association (OOIDA), Rogel Aguilera-Mederos [is] a victim of a broken system.

“Safety starts with a well-trained, well-rested, well-compensated driver behind the wheel that is treated like a professional—instead of just a replaceable commodity,” Pugh wrote.

“We need real investment in training—not just pass a test and be turned loose,” he added. “We need realistic training hours in all types of weather and driving terrain and conditions. The training must be done by experienced veterans of the road, awake and alert, sitting beside the trainee.”

Aguilera-Mederos obtained his commercial driver’s license (CDL) in Texas and there wasn’t any indication that he had much mountain driving experience. Pugh pointed out that “If he was even trained in Texas, there are no mountains there like the one in Colorado he was on,” Pugh noted. “Do we even know if he realized what a runaway ramp was?

This is a complicated issue with no easy solutions – The Team here at Thunder Funding would like to know your opinion regarding this case and the overall troubles the trucking industry is currently facing pertaining to driver training and accountability. Please comment below.

For more information about trucking industry news be sure to check out this blog post: Three Trends Disrupting The Trucking Industry